Inflation, hard-to-beat expectations and political stalemate provide a significant downward risk to market this week. (Quoted in the Weekend edition of the Financial Times)

Last week was dominated by disappointing manufacturing data from Europe and China, whilst markets shrugged off a less than impressive Budget. After such a substantial rally year to date, this correction is healthy. 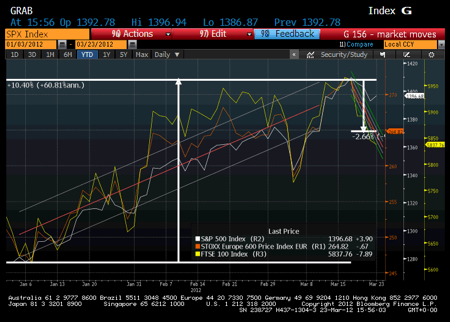 Graph showing the correction in world equity markets over the past week (S&P 500 in white, Eurostoxx 600 in orange, FTSE 100 in yellow); put in context of the substantial upward move year to date. Source: Bloomberg

This week, issues concerning Europe’s firepower, the US consumer and broader economic growth will determine the direction of markets. Inflation, hard-to-beat expectations and political stalemate provide a significant downward risk to market, although upward momentum could always drive them further.

As fuel price inflation dents sentiment in the US, the consumer may be squeezed and figures for income and spending may disappoint. Furthermore, the opportunity for upside surprises in durable goods orders and Q4 GDP growth is limited as forecasted figures are already high.

A two-day meeting of Europe’s finance ministers will be closely watched for signs of an expansion in the firepower of the rescue fund. The deadline to do so draws near and the pressure for progress grows. However, Germany remains staunchly against such a move and, even if achieved, the figure reached may still not be enough.

As European markets suffer the longest losing streak since November, the correction is a healthy one. The index is still up over 8% this year, despite many of the region’s problems remaining unsolved. The latest disappointment, a manufacturing industry contracting more than forecast, is merely the next knock in an overall shrinking group of countries. Just this month the European Central Bank reduced the outlook for growth this year to a 0.1% contraction, keeping the region in recession. As expressed by Tim Geitner in the US, Europe is “only at beginning of a very tough, very long, hard road”.

See this as a quick video clip on CNBC

Crucial for Italy to restore confidence in their markets and bring down hefty borrowing costs is the structural reform of its labour laws. The country’s growth has lagged the euro average for more than a decade and with unemployment at the highest level since 2001 (9.2%), the fear is they will be left further and further behind. Unfortunately, talks between government and union have failed to ease firing laws, which would stop older workers being protected to the detriment of the youth (suffering from a massive 30% unemployment rate) and encourage hiring. With elections early next year, the time for progress is running out.

Portugal, seen as the next card to fall after Greece, succeeded in auctioning 4 month bills at the lowest yield since late 2010. Demand for these bonds reached 7 times the amount on offer, implying investors were sufficiently confident on the short term outlook for the country. Nevertheless, long term bond yields remain elevated, with investors requiring 12.5% to lend to Italy for 10 years. With a 3.3% economic contraction expected this year, unemployment at 14.8% and strikes over pay, welfare cuts and tax hikes, the long-term outlook is yet to be rosy. The deepening slump has dampened deficit reduction, with the figures almost tripling in the first two months of this year. The fear is more rescue funds will eventually be needed.

ECB passing the baton: unwinding support for banks but had better move cautiously

Interestingly, despite the potential pitfalls, the ECB seems to be scaling back certain bond purchases. Prior to the recent Long-Term Refinancing Operations (LTRO), a measure to buy €40bn of bonds was set. Since then, only €9bn has been bought and the policy expected to last until autumn may be wound down sooner. This is understandable with LTRO, injecting a whopping €1tn of liquidity having made this ‘gesture’ obsolete. Furthermore, a member of the ECB has proclaimed that it “has done its part now governments must do theirs”. A move towards letting banks stand on their own two feet is the long-term strategy for stability, but with potential for risk to re-erupt, they had better step cautiously.