“United we stand; divided we fall” Aesop (Ancient Greek Fabulist and Author of a collection of Greek fables. 620 BC-560 BC)

The problem with the “EU” banner is that it links together economies that are quite different from each other. Much press has been dedicated to the fate of the PIIGS – Portugal, Italy, Ireland, Greece and Spain but it is interesting to compare journalistic exposure with economic impact. Greece Ireland and Portugal account for less than 5% of EU GDP. To save you shifting through pages of research – here are the key pertinent points for each economy… The structure follows that of my earlier assessment of the futility of EU bailout mechanisms– 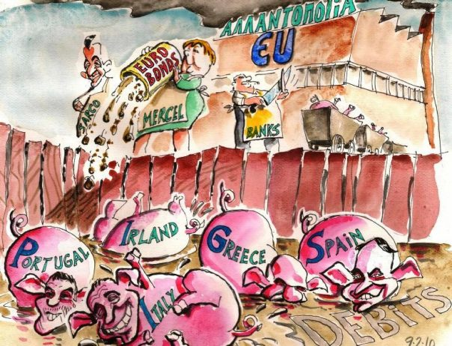 Source: "Belgium Joins The PIIGS: And Then They Were Six" - Gavan Nolan, Econotwist The Swapper - learning and understanding the increasingly complex financial world.

Portugal – A Disappointing Deficit, Dipping Back Into Recession

Italy – Saved by its Savings, Economic Exposure but Debt Isolation

Ireland – The Public Prefers a Default

Although not within the PIIGS acronym – it is important nonetheless to mention this economy at this point and a great example of the potential impacts to investment. It’s a case that highlights the Government can’t win – if it decides that instead of implementing austerity programs eliciting social unrest, it will instead employ more crowd-pleasing reforms, it will get punished nonetheless….

Contrast with the Core

INVESTMENT INSIGHT: When investing in the EU – differentiate between countries!

World unity is the wish of the hopeful, the goal of the idealist and the dream of the romantic. Yet it is folly to the realist and a lie to the innocent – Don Williams, Jr  (American , b.1968)

There has been much in the news lately on the outlook for the European Union. In May, Greece was offered €120bn in EU government and IMF loans over 3 years to replace the need for new borrowing at exorbitant market rates – the “first bailout of a Eurozone country and the biggest bailout of any country”.  Just last month Ireland joined the queue and received a €85bn injection plan. The flame of contagion was burning bright as investors worried Spain, Portugal and Italy were to follow suit quickly (The other members of the PIIGS acronym – and we’ve been advised what risks lie in an acronym!). Then just as markets calmed after the ECB staged their largest intervention and purchased mainly Portuguese and Irish bonds on Friday, the rating agency Moody’s announced it was downgrading Hungary’s debt by not one but two notches!  This country isn’t even in the periphery of the EU, it’s outside of it entirely… and so the contagion spreads….

Why won’t the EU bailouts solve everything?

1. FLAWED LOGIC: attempting to solve the problem of debt with more debt

2. NOT SOLVING PROBLEM: without growth, the debt burden as a share of GDP will continue to rise. The latest European Financial Mechanism only covers maters until 2013,  if Debt/GDP has not reduced significantly then bond holders start sharing the pain

3. UNCERTAINTY: ministers keep changing their minds! (“no bail out” to “bailout”, “no pain for creditors” to “sharing the burden”) – markets don’t like uncertainty!

What the ECB wants EU countries to do: Be prepared to increase the size of emergency bailouts, consolidate budgets and reform (implement austerity measures and assume national responsibility so the ECB can avoid being a bailout tool)

How can you exploit this?

“Europe is difficult to understand for markets. They work in an irrational way sometimes,” Christine Lagarde, French economy minister

“American households have shifted their cash flows from illiquid real estate and consumer durables to paying down mortgages and consumer debt…It is this rapid rise in aversion to illiquid risk that explains a large part of the anaemic recovery in the US.” Greenspan

DRIVER OF REVIVAL: The US consumer has historically been a crucial driver of economic renewal

PRECARIOUS POSITION: Many worried about employment, have under-saved for retirement

STIFFLED STIMULUS: The propensity to spend (and boost the economy) will be limited

The importance of the consumer and the concerns surrounding the structural headwinds they face are undeniable. Consumer spending accounts for approximately 70% of US GDP (although I’ve read an interesting piece by Darren Marron arguing this figure is actually nearer 60% when spending on imports are dealt with more appropriately[1] but nevertheless, this is still a significant percentage). The magnitude of the problem has been well described by John Maudlin who pointed out that versus the last recession, we have seen “double the asset deflation, triple the job loss, coupled with a collapse in credit.” It doesn’t look likely that the consumer will be bouncing straight back! 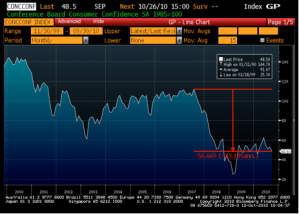 Conference Board Consumer Confidence Index down 57% since 2007. Source: Bloomberg

On the subject of unemployment, although it is universally monitored, what has been missed by many is what the rate does not take into account. Salaries have been cut and working hours reduced. This adds to the misery of many consumers. Furthermore, it is these people who are working part-time that will be hired back into full-time employment before companies reach out to the many unemployed. This must be assessed within the context of an expanding labour force where a substantial amount of new jobs are needed every month in the US.

Looking forward, another key limiting factor on the consumers’ propensity to spend is the move to save instead, as they look to fund their retirement / non-wage earning years. The “Baby Boom” generation is expected to account for nearly 60% of net US wealth by 2015, according to a study by McKinsey,[2] and their turnaround from spending to focus on saving will be magnified by the fact that they have historically under-saved. The aforementioned report identified that as low as only 25% are “financially prepared for retirement”, thus the decrease in the spending habits of the vast majority will be significant.  Inside Europe the story isn’t much brighter and the UK pension gap (the difference between the income needed to live a comfortable retirement and the actual income individuals can expect from their current pensions) has been heralded as the “biggest in Europe”[3] by national papers. The OECD sets an average pension at around 59% of the earnings built during a full working career, a stark comparison with the UK’s 31%[4]. With relatively small public pension, an individual will need to make extra savings to ensure their standard of living does not drop dramatically as they move into retirement. This is not an outlook that will encourage the spending that will boost or even support the economy. (For a deeper insight into the ageing populations of the developed world see What is a \”Structural limitation to growth\”? How can I exploit it?) 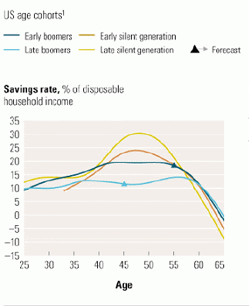 ECONOMIC IMPACT: This points to a muted recovery instead of a “V” shaped bounce-back.

INVESTMENT INSIGHT: Look at companies which aren’t as heavily reliant on the Developed Consumer but with an international reach and operations within Emerging Markets. To exploit the ageing of the “Baby Boomers” within Developed Markets, see What is a \”structural limitation to growth\”? How can I exploit it? and invest in companies positioned to benefit from an increased reliance on healthcare, nursing homes etc.