World unity is the wish of the hopeful, the goal of the idealist and the dream of the romantic. Yet it is folly to the realist and a lie to the innocent – Don Williams, Jr  (American , b.1968)

There has been much in the news lately on the outlook for the European Union. In May, Greece was offered €120bn in EU government and IMF loans over 3 years to replace the need for new borrowing at exorbitant market rates – the “first bailout of a Eurozone country and the biggest bailout of any country”.  Just last month Ireland joined the queue and received a €85bn injection plan. The flame of contagion was burning bright as investors worried Spain, Portugal and Italy were to follow suit quickly (The other members of the PIIGS acronym – and we’ve been advised what risks lie in an acronym!). Then just as markets calmed after the ECB staged their largest intervention and purchased mainly Portuguese and Irish bonds on Friday, the rating agency Moody’s announced it was downgrading Hungary’s debt by not one but two notches!  This country isn’t even in the periphery of the EU, it’s outside of it entirely… and so the contagion spreads…. 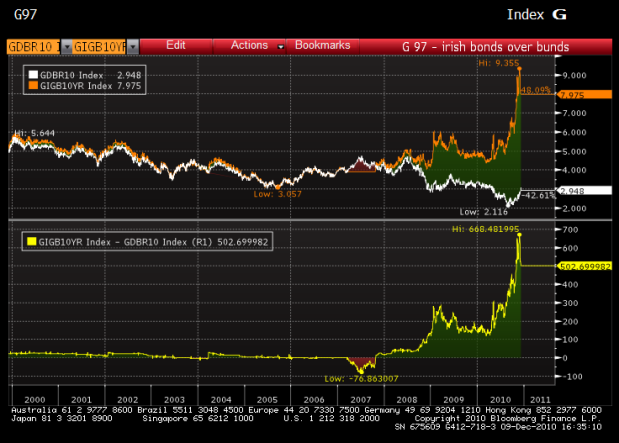 Why won’t the EU bailouts solve everything?

1. FLAWED LOGIC: attempting to solve the problem of debt with more debt

2. NOT SOLVING PROBLEM: without growth, the debt burden as a share of GDP will continue to rise. The latest European Financial Mechanism only covers maters until 2013,  if Debt/GDP has not reduced significantly then bond holders start sharing the pain

3. UNCERTAINTY: ministers keep changing their minds! (“no bail out” to “bailout”, “no pain for creditors” to “sharing the burden”) – markets don’t like uncertainty!

What the ECB wants EU countries to do: Be prepared to increase the size of emergency bailouts, consolidate budgets and reform (implement austerity measures and assume national responsibility so the ECB can avoid being a bailout tool)

How can you exploit this?

“Europe is difficult to understand for markets. They work in an irrational way sometimes,” Christine Lagarde, French economy minister